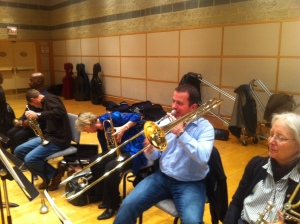 Zsolt Szabo warming up prior to an Ars Viva Symphony Orchestra rehearsal.

This photo is of Zsolt warming up before a rehearsal for the recent November 4th concert which included Brahms’ Academic Festival Overture, Sibelius’ Symphony No. 4, and Shostakovich’s Symphony No. 9.